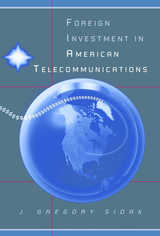 Restrictions on foreign investment in U.S. telecommunications firms have harmed the interests of American consumers and investors, argues J. Gregory Sidak in this convincing study. Sidak shows why these restrictions, originally intended to protect America from the perils of wireless telegraphy by foreign agents, should be repealed.

Basing his analysis on legislative history, statutory and constitutional interpretation, and finance and trade theory, Sidak shows that these restrictions no longer serve their national security purpose (if they ever did). Instead they deny American consumers lower prices and more robust innovation, hamper access of American investors to foreign telecommunications markets, and unconstitutionally impinge on freedom of speech. Sidak's study encompasses the Telecommunications Act of 1996, recent global mergers such as British Telecom-MCI, and the 1997 World Trade Organization agreement to liberalize trade in telecommunications services.
TABLE OF CONTENTS