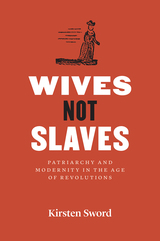 Wives not Slaves begins with the story of John and Eunice Davis, a colonial American couple who, in 1762, advertised their marital difficulties in the New Hampshire Gazette—a more common practice for the time and place than contemporary readers might think. John Davis began the exchange after Eunice left him, with a notice resembling the ads about runaway slaves and servants that were a common feature of eighteenth-century newspapers. John warned neighbors against “entertaining her or harbouring her. . . or giving her credit.” Eunice defiantly replied, “If I am your wife, I am not your slave.” With this pointed but problematic analogy, Eunice connected her individual challenge to her husband’s authority with the broader critiques of patriarchal power found in the politics, religion, and literature of the British Atlantic world.

Kirsten Sword’s richly researched history reconstructs the stories of wives who fled their husbands between the mid-seventeenth and early nineteenth centuries, comparing their plight with that of other runaway dependents.  Wives not Slaves explores the links between local justice, the emerging press, and transatlantic political debates about marriage, slavery and imperial power. Sword traces the relationship between the distress of ordinary households, domestic unrest, and political unrest, shedding new light on the social changes imagined by eighteenth-century revolutionaries, and on the politics that determined which patriarchal forms and customs the new American nation would—and would not—abolish.
AUTHOR BIOGRAPHY
Kirsten Sword is a historian of early American and women’s history affiliated with Indiana University Bloomington.

REVIEWS
“Wives not Slaves is a must-read for anyone interested in the interplay between popular culture and law. Readers will appreciate both the narrative power of its case studies and the elegance of its arguments. This powerful book not only deconstructs the feminist analogy of marriage as slavery, it reassesses the notion of expanding equality in the age of revolution. Better yet, it is filled with thought-provoking implications for our own age.”
— Laurel Thatcher Ulrich, Harvard University

“Sword unsilences the past, recovering the cacophonous voices of all the ordinary wives and husbands who put their domestic unions on trial in the pages of early American newspapers. A keenly argued study of the making and breaking of colonial marriages in the court of public opinion, Wives Not Slaves explains how marital practices developed in dialogue with the elaboration of other species of household dependence even as it eviscerates the false equivalence between divorce and emancipation.”
— Richard Bell, University of Maryland


Introduction: “If I am your Wife, I am not your Slave”
The Political Uses of Ancient Patriarchy
Divorce, Jurisdiction, and the Location of Law
Debt and the Paradox of Masculine Possessory Rights in the Age of Revolutions

1. The Trials of Christopher and Elizabeth Lawson: An Introduction to Post-Reformation Debates about Marriage
The Puritan Context of the Lawson Marriage
Arguments for Separation and Divorce
Weighing the Charges: Credibility, Economic Misconduct, Sexual Crime, Racial Boundaries, and Slander
Law’s Irresolution

2. Submit or Starve: Manby v. Scott and the Making of a Precedent

Dynastic Marriage and Family Politics
Divorce in Interregnum England
Manby v. Scott and the Domestication of Politics
Making a Precedent

3. The Runaway Press
Runaway Slaves and Servants and the Development of Colonial Labor Systems
Wayward Wives, Colonial Law, and a Shift in Practice
The Rise of the Press
4. Marriage, Slavery, and Anglo-Imperial Jurisdictional Politics
Disorder in the Legal System: Common Law, Equity, and Ecclesiastical Jurisdiction
Colonial Household Conflicts, Local Law, and the Shadow of Imperial Norms in the 1720s
Ancient Patriarchy and the Invention of “Possessory Rights”
Repercussions of Imperial Intervention in Marriage Law
The Rise of Blackstone
The Echo Chamber of the 1760s
5. A Matter of Credit: Husbands’ Claims

“Lest she should run me in debt”: Credibility and Masculine Vulnerability
“Behaved in a very unbecoming manner . . . and has eloped from me”: Implied Sexual Scandal
“Some debates that have subsisted between us”: Domestic Violence
“Will not be persuaded, either by me or her best friends, to return”: Preempting the Law
“To her usual place of abode, and to her duty”: Husbands versus Communities
6. “In Justice to my Character”: Wives’ Replies

A Change in Values or a Change in Venue? Patterns over Time and Place
Ann Wood’s Advertisement
“Endanger my life by dwelling with him”: Ann Wood’s Plea
“On the Providence of God”: Prayers and Curses
“The few remaining days of my disconsolate life”: Sentimental Dependence
Authorship, Agency, and Remedy
7. Wives Not Slaves

Liberty versus Loyalty: Marriage as Metaphor
“If I am your Wife, I am not your Slave”
“The Privilege of my Negroe Wench”
“Her service & conjugal comfort . . . which he had a right to have”
“We know better than to repeal our Masculine systems”
8. Rethinking the Revolutionary Road to Divorce

Divorce and the Jurisdictional and Personal Politics of Revolution
Divorce and Emancipation: A Useful False Equivalence
Divorce as a Woman’s Remedy: Revolutionary Expectations and the “First Families” of the United States
“Down the Stream of Time Unnoticed”: Family Secrets, Family Stories, and Legal Change

Epilogue: “The Rigour of the Old Rule”