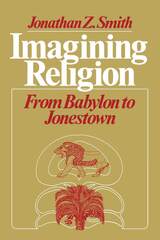 With this influential book of essays, Jonathan Z. Smith has pointed the academic study of religion in a new theoretical direction, one neither theological nor willfully ideological.

Making use of examples as apparently diverse and exotic as the Maori cults in nineteenth-century New Zealand and the events of Jonestown, Smith shows that religion must be construed as conventional, anthropological, historical, and as an exercise of imagination. In his analyses, religion emerges as the product of historically and geographically situated human ingenuity, cognition, and curiosity—simply put, as the result of human labor, one of the decisive but wholly ordinary ways human beings create the worlds in which they live and make sense of them.

"These seven essays . . . display the critical intelligence, creativity, and sheer common sense that make Smith one of the most methodologically sophisticated and suggestive historians of religion writing today. . . . Smith scrutinizes the fundamental problems of taxonomy and comparison in religious studies, suggestively redescribes such basic categories as canon and ritual, and shows how frequently studied myths may more likely reflect situational incongruities than vaunted mimetic congruities. His final essay, on Jonestown, demonstrates the interpretive power of the historian of religion to render intelligible that in our own day which seems most bizarre."—Richard S. Sarason, Religious Studies Review


Acknowledgments
Introduction
1. Fences and Neighbors: Some Contours of Early Judaism
2. In Comparison a Magic Dwells
3. Sacred Persistence: Toward a Redescription of Canon
4. The Bare Facts of Ritual
5. The Unknown God: Myth in History
6. A Pearl of Great Price and a Cargo of Yams
7. The Devil in Mr. Jones
Appendixes
Notes
Index