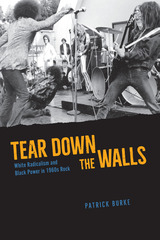 From the earliest days of rock and roll, white artists regularly achieved fame, wealth, and success that eluded the Black artists whose work had preceded and inspired them. This dynamic continued into the 1960s, even as the music and its fans grew to be more engaged with political issues regarding race. In Tear Down the Walls, Patrick Burke tells the story of white American and British rock musicians’ engagement with Black Power politics and African American music during the volatile years of 1968 and 1969. The book sheds new light on a significant but overlooked facet of 1960s rock—white musicians and audiences casting themselves as political revolutionaries by enacting a romanticized vision of African American identity. These artists’ attempts to cast themselves as revolutionary were often naïve, misguided, or arrogant, but they could also reflect genuine interest in African American music and culture and sincere investment in anti-racist politics. White musicians such as those in popular rock groups Jefferson Airplane, the Rolling Stones, and the MC5, fascinated with Black performance and rhetoric, simultaneously perpetuated a long history of racial appropriation and misrepresentation and made thoughtful, self-aware attempts to respectfully present African American music in forms that white leftists found politically relevant. In Tear Down the Walls Patrick Burke neither condemns white rock musicians as inauthentic nor elevates them as revolutionary. The result is a fresh look at 1960s rock that provides new insight into how popular music both reflects and informs our ideas about race and how white musicians and activists can engage meaningfully with Black political movements.
AUTHOR BIOGRAPHY
Patrick Burke is associate professor of music at Washington University in St. Louis. He is the author of Come In and Hear the Truth: Jazz and Race on 52nd Street, also published by the University of Chicago Press.
TABLE OF CONTENTS

3 One Plus One: Jean-Luc Godard Meets the Rolling Stones—London Film Festival, November 29, 1968

4 The Seats Belong to the People: The Battle of the Fillmore East—Lower East Side, Manhattan, December 26, 1968

5 Declare the Nation into Being: Woodstock and the Movement—Woodstock Music & Art Fair, White Lake, NY, August 15–18, 1969