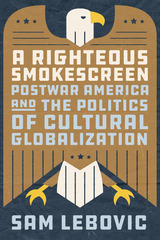 BUY
A Righteous Smokescreen: Postwar America and the Politics of Cultural Globalization
by Sam Lebovic
University of Chicago Press
eISBN: 978-0-226-81609-8
Cloth: 978-0-226-81608-1
An examination of how the postwar United States twisted its ideal of “the free flow of information” into a one-sided export of values and a tool with global consequences.

When the dust settled after World War II, the United States stood as the world’s unquestionably pre-eminent military and economic power. In the decades that followed, the country exerted its dominant force in less visible but equally powerful ways, too, spreading its trade protocols, its media, and—perhaps most importantly—its alleged values. In A Righteous Smokescreen, Sam Lebovic homes in on one of the most prominent, yet ethereal, of those professed values: the free flow of information. This trope was seen as capturing what was most liberal about America’s self-declared leadership of the free world. But as Lebovic makes clear, even though diplomats and public figures trumpeted the importance of widespread cultural exchange, these transmissions flowed in only one direction: outward from the United States. Though other countries did try to promote their own cultural visions, Lebovic shows that the US moved to marginalize or block those visions outright, highlighting the shallowness of American commitments to multilateral institutions, the depth of its unstated devotion to cultural and economic supremacy, and its surprising hostility to importing foreign cultures. His book uncovers the unexpectedly profound global consequences buried in such ostensibly mundane matters as visa and passport policy, international educational funding, and land purchases for embassies. Even more crucially, A Righteous Smokescreen does nothing less than reveal that globalization was not the inevitable consequence of cultural convergence or the natural outcome of putatively free flows of information—it was always political to its core.
AUTHOR BIOGRAPHY
Sam Lebovic is associate professor of history at George Mason University and the author of Free Speech and Unfree News: The Paradox of Press Freedom in America.
REVIEWS
“A Righteous Smokescreen presents a tightly focused, impeccably documented argument that the United States’ rhetorical commitment to liberal internationalism after World War II was mere camouflage for its hard-nosed drive toward global dominance. Lebovic crisply deconstructs the pieties about freedom that underpinned Washington’s claims to global leadership in the 1940s—and continue to animate American foreign-policy debates today.”
— Diana Lemberg, author of Barriers Down: How American Power and Free-Flow Policies Shaped Global Media