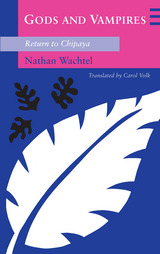 When Nathan Wachtel, the distinguished historical anthropologist, returned to the village of Chipaya, the site of his extensive fieldwork in the Bolivian Andes, he learned a group of Uru Indians was being incarcerated and tortured for no apparent reason. Even more strangely, no one—not even his closest informant and friend—would speak about it.

Wachtel discovered that a series of recent deaths and misfortunes in Chipaya had been attributed to the evil powers of the Urus, a group usually regarded with suspicion by the other ethnic groups. Those incarcerated were believed to be the chief sorcerers and vampires whose paganistic practices had brought death to Chipaya by upsetting the social order. Wachtel's investigation, told in Gods and Vampires: Back to Chipaya, reveals much about relations between the Urus and the region's dominant ethnic groups and confronts some of the most trenchant issues in contemporary anthropology. His analysis shows that the Urus had become victims of the same set of ideals the Spanish had used, centuries before, to establish their hegemony in the region.

Presented as a personal detective story, Gods and Vampires is Wachtel's latest work in a series studying the ongoing impact of the Spanish conquest on the Andean consciousness and social system. Its insight into Bolivian society and the legacy of hegemony confronts some of the most trenchant issues in contemporary anthropologyand will be of great interest to scholars of anthropology, Latin American studies, and Native American studies.
TABLE OF CONTENTS