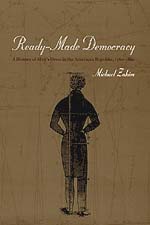 Ready-Made Democracy explores the history of men's dress in America to consider how capitalism and democracy emerged at the center of American life during the century between the Revolution and the Civil War. Michael Zakim demonstrates how clothing initially attained a significant place in the American political imagination on the eve of Independence. At a time when household production was a popular expression of civic virtue, homespun clothing was widely regarded as a reflection of America's most cherished republican values: simplicity, industriousness, frugality, and independence.

By the early nineteenth century, homespun began to disappear from the American material landscape. Exhortations of industry and modesty, however, remained a common fixture of public life. In fact, they found expression in the form of the business suit. Here, Zakim traces the evolution of homespun clothing into its ostensible opposite—the woolen coats, vests, and pantaloons that were "ready-made" for sale and wear across the country. In doing so, he demonstrates how traditional notions of work and property actually helped give birth to the modern industrial order. For Zakim, the history of men's dress in America mirrored this transformation of the nation's social and material landscape: profit-seeking in newly expanded markets, organizing a waged labor system in the city, shopping at "single-prices," and standardizing a business persona.

In illuminating the critical links between politics, economics, and fashion in antebellum America, Ready-Made Democracy will prove essential to anyone interested in the history of the United States and in the creation of modern culture in general.
AUTHOR BIOGRAPHY
Michael Zakim teaches history at Tel Aviv University.
TABLE OF CONTENTS