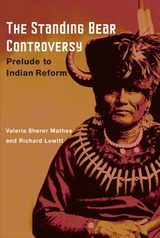 The Standing Bear Controversy: PRELUDE TO INDIAN REFORM
by Valerie Sherer Mathes and Richard Lowitt
University of Illinois Press, 2003
Cloth: 978-0-252-02852-6
In the spring of 1877 government officials forcibly removed members of the Ponca tribe from their homelands in the southeastern corner of Dakota territory, relocating them in the Indian Territory in Oklahoma. When Ponca Chief Standing Bear attempted to lead a group of his people home he was arrested, detained, and put on trial.

In this book Valerie Sherer Mathes and Richard Lowitt examine how the national publicity surrounding the trial of Chief Standing Bear, as well as a speaking tour by the chief and others, brought the plight of his tribe, and of tribespeople across America, to the attention of the general public, serving as a catalyst for the nineteenth-century Indian reform movement.

As the authors show, the eventual ramifications of the removal, flight, and trial of Standing Bear were extensive, and included the rise of an organized humanitarian reform movement, significant changes in the administration of Indian affairs, and the passage of the General Allotment Act in 1887.

This is the first full-length study of the Standing Bear trial and its consequences, and Mathes and Lowitt draw on a vast array of manuscript, diary, and journalistic sources in order to chronicle the events of 1877, as well as the effect the trial had on broader American popular opinion, on the federal government, and finally on the Native American population as a whole.