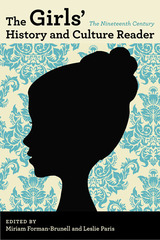 The Girls' History and Culture Reader: The Nineteenth Century provides scholars, instructors, and students with the most influential essays that have defined the field of American girls' history and culture. A relatively new and energetic field of inquiry, girl-centered research is critical for a fuller understanding of women and gender, a deeper consideration of childhood and adolescence, and a greater acknowledgment of the significance of generation as a historical force in American culture and society.

Bringing together work from top scholars of women and youth, The Girls' History and Culture Reader: The Nineteenth Century addresses topics ranging from diary writing and toys to prostitution and slavery. Covering girlhood and the relationships between girls and women, this pioneering volume tackles pivotal themes such as education, work, play, sexuality, consumption, and the body. The reader also illuminates broader nineteenth-century developments—including urbanization, industrialization, and immigration--through the often-overlooked vantage point of girls. As these essays collectively suggest, nineteenth-century girls wielded relatively little political or social power but carved out other spaces of self-expression.