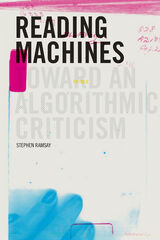 Besides familiar and now-commonplace tasks that computers do all the time, what else are they capable of? Stephen Ramsay's intriguing study of computational text analysis examines how computers can be used as "reading machines" to open up entirely new possibilities for literary critics. Computer-based text analysis has been employed for the past several decades as a way of searching, collating, and indexing texts. Despite this, the digital revolution has not penetrated the core activity of literary studies: interpretive analysis of written texts.

Computers can handle vast amounts of data, allowing for the comparison of texts in ways that were previously too overwhelming for individuals, but they may also assist in enhancing the entirely necessary role of subjectivity in critical interpretation. Reading Machines discusses the importance of this new form of text analysis conducted with the assistance of computers. Ramsay suggests that the rigidity of computation can be enlisted in the project of intuition, subjectivity, and play.
AUTHOR BIOGRAPHY

Stephen Ramsay is an associate professor of English at the University of Nebraska and has written and lectured widely on subjects related to literary theory and software design for humanities.