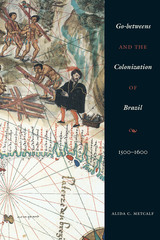 Doña Marina (La Malinche) . . . Pocahontas . . . Sacagawea—their names live on in historical memory because these women bridged the indigenous American and European worlds, opening the way for the cultural encounters, collisions, and fusions that shaped the social and even physical landscape of the modern Americas. But these famous individuals were only a few of the many thousands of people who, intentionally or otherwise, served as “go-betweens” as Europeans explored and colonized the New World. In this innovative history, Alida Metcalf thoroughly investigates the many roles played by go-betweens in the colonization of sixteenth-century Brazil. She finds that many individuals created physical links among Europe, Africa, and Brazil—explorers, traders, settlers, and slaves circulated goods, plants, animals, and diseases. Intercultural liaisons produced mixed-race children. At the cultural level, Jesuit priests and African slaves infused native Brazilian traditions with their own religious practices, while translators became influential go-betweens, negotiating the terms of trade, interaction, and exchange. Most powerful of all, as Metcalf shows, were those go-betweens who interpreted or represented new lands and peoples through writings, maps, religion, and the oral tradition. Metcalf's convincing demonstration that colonization is always mediated by third parties has relevance far beyond the Brazilian case, even as it opens a revealing new window on the first century of Brazilian history.
AUTHOR BIOGRAPHY
Alida Metcalf is Harris Masterson, Jr. Professor of History at Rice University.
TABLE OF CONTENTS