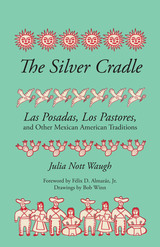 Originally published in 1955, The Silver Cradle is the story of a year in the life of the Mexican American people of San Antonio, Texas. During the 1950s, Julia Nott Waugh recorded the performances of such seasonal and religious traditions as Las Posadas, Los Pastores, Las Calaveras, the Blessing of the Animals, the liturgical observances of Holy Week, and festivities of el diez y seis de septiembre (Mexican Independence Day), among others.

Although years have passed and many of the details of observances have changed, the festival calendar and the joy and sincerity of the Mexican American people in honoring its customs and obligations have not disappeared. Now, in fact, a much wider population shares and appreciates the pageantry preserved for us by people like Graciana Reyes, in whose prized silver cradle the Christ Child slept every year at Christmas, and like Doroteo Domínguez, whose annual devotion to presenting a thousand-year-old pastoral epic in his back yard was legendary.

Waugh has done much more than just open a window onto a charming past. She has captured for us one of the true gifts of our Mexican American heritage—the willingness to ritually celebrate the passage of time and to embellish the occasions with sensitivity and fervor. This book will appeal to the general reader as well as to those interested in folk traditions and Mexican American culture.

AUTHOR BIOGRAPHY
Julia Nott Waugh (1888-1958) was a writer specializing in Texas history as well as Mexican-American customs and folkways.
REVIEWS
Mrs. Waugh's book is by far one of the best of the vast number of volumes on San Antonio. . . . a contribution that will always sympathetically keep a record of part of the real life of the people.
— Southwestern Historical Quarterly