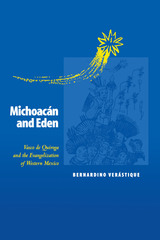 Don Vasco de Quiroga (1477/8–1565) was the first bishop of Michoacán in Western Mexico. Driven by his profound respect for Spanish jurisprudence and the desire to convert the native Purhépecha-Chichimec peoples to a purified form of Christianity, he sought to establish New World Edens in Michoacán by congregating the people into pueblo-hospital communities, where clerics could more easily teach them the fundamental beliefs of Christianity and the values of Spanish culture. In this broadly synthetic study, Bernardino Verástique explores Vasco de Quiroga’s evangelizing project in its full cultural and historical context. He begins by recreating the complex and not wholly incompatible worldviews of the Purhépecha and the Spaniards at the time of their first encounter in 1521. With Quiroga as a focal point, Verástique then traces the uneasy process of assimilation and resistance that occurred on both sides as the Spaniards established political and religious dominance in Michoacán. He describes the syncretisms, or fusions, between Christianity and indigenous beliefs and practices that arose among the Purhépecha and relates these to similar developments in other regions of Mexico. Written especially for students and general readers, this book demonstrates how cultural and geographical environments influence religious experience, while it adds to our understanding of the process of indigenous appropriation of Christian theological concepts in the New World.
AUTHOR BIOGRAPHY
Bernardino Verástique was Associate Professor of Religious Studies at Our Lady of the Lake University in San Antonio.
TABLE OF CONTENTS


List Of IllustrationsAcknowledgmentsIntroductionOne: The Purhépecha-Chichimec of Michoacán Two: The Purhépecha Religious WorldviewThree: The Historical Landscape of SpainFour: Religion in Spain on the Eve of the ConquestFive: The Conquest of Michoacán and the Appointment of Vasco de QuirogaSix: The Christianization of the PurhépechaSeven: Información en derecho: Quiroga's Report to the Royal Council of the IndiesEight: The Utopian Experiment: Santa Fe de la Laguna EpilogueNotesBibliographyIndexIntroduction