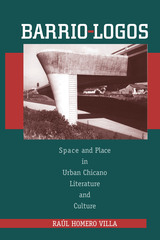 Struggles over space and resistance to geographic displacement gave rise to much of Chicano history and culture. In this pathfinding book, Raúl Villa explores how California Chicano/a writers, journalists, artists, activists, and musicians have used expressive culture to oppose the community-destroying forces of urban renewal programs and massive freeway development and to create and defend a sense of Chicano place-identity. Villa opens with a historical overview that shows how Chicano communities and culture have developed in response to conflicts over space ever since the United States’ annexation of Mexican territory in the 1840s. Then, turning to the work of contemporary members of the Chicano intelligentsia such as poet Lorna Dee Cervantes, novelist Ron Arias, and the art collective RCAF (Rebel Chicano Art Front), Villa demonstrates how their expressive practices re-imagine and re-create the dominant urban space as a community enabling place. In doing so, he illuminates the endless interplay in which cultural texts and practices are shaped by and act upon their social and political contexts.
AUTHOR BIOGRAPHY
Raúl Homero Villa is Professor of English and Comparative Literary Studies at Occidental College in Los Angeles.
TABLE OF CONTENTS