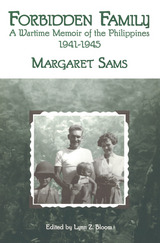 Written just five years after the end of World War II, this is Margaret Sams’s moving testimony of life in a Japanese internment camp—the can of Spam hoarded for Christmas dinner, the clandestine radio hidden in her sewing kit, the beheading of other prisoners for transgressions. With her husband held elsewhere as a prisoner of war and with a small son to protect, Margaret broke the rules both of society and of her captors to fall in love and bear a child with a kind and daring fellow internee, Jerry Sams.