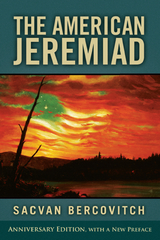 When Sacvan Bercovitch’s The American Jeremiad first appeared in 1978, it was hailed as a landmark study of dissent and cultural formation in America, from the Puritans’ writings through the major literary works of the antebellum era. For this long-awaited anniversary edition, Bercovitch has written a deeply thoughtful and challenging new preface that reflects on his classic study of the role of the political sermon, or jeremiad, in America from a contemporary perspective, while assessing developments in the field of American studies and the culture at large.

2 The Blessings of Time and Eternity

3 The Genetics of Salvation

4 The Typology of America's Mission

6 Epilogue: The Symbol of America