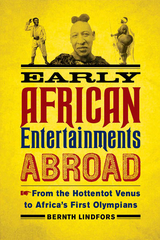 In the nineteenth and early twentieth centuries African and pseudo-African performers were displayed as curiosities throughout Europe and America. Appearing in circuses, ethnographic exhibitions, and traveling shows, these individuals and troupes drew large crowds. As Bernth Lindfors shows, the showmen, impresarios, and even scientists who brought supposedly representative inhabitants of the "Dark Continent" to a gaping public often selected the performers for their sensational impact. Spotlighting and exaggerating physical, mental, or cultural differences, the resulting displays reinforced pernicious racial stereotypes and left a disturbing legacy.
Using period illustrations and texts, Early African Entertainments Abroad illuminates the mindset of the era's largely white audiences as they viewed wax models of Africans with tails and watched athletic competitions showcasing hungry cannibals. White spectators were thus assured of their racial superiority. And blacks were made to appear less than fully human precisely at the time when abolitionists were fighting to end slavery and establish equality.
AUTHOR BIOGRAPHY
Bernth Lindfors is a professor emeritus of English and African literatures at the University of Texas at Austin. He is the author of a number of books on African literature and folklore, including Early Soyinka (2008) and Early Achebe (2009).
TABLE OF CONTENTS