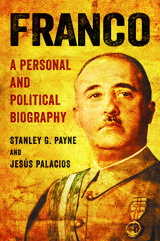 General Francisco Franco (1892–1975), ruler of Spain for nearly forty years, was one of the most powerful and controversial leaders in that nation's long history. This deeply researched biography treats the three major aspects of his life—personal, military, and political. It depicts his early life, explains his career and rise to prominence as an army officer who became Europe's youngest interwar brigadier general in 1926, and then discusses his role in the affairs of the troubled Second Spanish Republic.

Stanley G. Payne and Jesús Palacios examine in detail how Franco became dictator and how his leadership led to victory in the Spanish Civil War that consolidated his regime. They also explore Franco's role in the great repression that accompanied the Civil War—resulting in tens of thousands of executions—and examine at length his controversial role in World War II. This masterful biography highlights Franco's metamorphoses and adaptations to retain power as politics, culture, and economics shifted in the four decades of his dictatorship.

AUTHOR BIOGRAPHY
Stanley G. Payne is the Hilldale–Jaume Vicens Vives Professor of History Emeritus at the University of Wisconsin–Madison and the author of many books, including A History of Fascism, 1914–1945; The Franco Regime, 1936–1975; and Spain: A Unique History. Jesús Palacios is a noted historian, investigative journalist, and adjunct professor at the University of Madrid.
TABLE OF CONTENTS

5 The Destruction of Republican Democracy (1936)

18 Franco and the Modernization of Spain

Conclusion: Franco in the Perspective of History