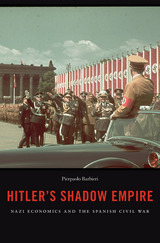 The Nazis provided Franco’s Nationalists with planes, armaments, and tanks in their civil war against the Communists but behind this largesse was a Faustian bargain. Pierpaolo Barbieri makes a convincing case that the Nazis hoped to establish an economic empire in Europe, and in Spain they tested the tactics intended for future subject territories.
TABLE OF CONTENTS
Contents
Introduction: Bones Beneath
1. Two Spains
2. “Today Is So Far from Yesterday”
3. The Rise and Rise of Hjalmar Schacht
4. “Give Me Four Years”
5. Dawn of Intervention
6. The Precipice
7. The Shadow Empire
8. “Hateful to God and to His Enemies”
9. The Formal Empire
Conclusion: Integrated Europe
Appendix: Economic Data
Notes
Acknowledgments
Index