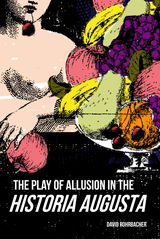 By turns outlandish, humorous, and scatological, the Historia Augusta is an eccentric compilation of biographies of the Roman emperors and usurpers of the second and third centuries. Historians of late antiquity have struggled to explain the fictional date and authorship of the work and its bizarre content (did the Emperor Carinus really swim in pools of floating apples and melons? did the usurper Proculus really deflower a hundred virgins in fifteen days?). David Rohrbacher offers, instead, a literary analysis of the work, focusing on its many playful allusions. Marshaling an array of interdisciplinary research and original analysis, he contends that the Historia Augusta originated in a circle of scholarly readers with an interest in biography, and that its allusions and parodies were meant as puzzles and jokes for a knowing and appreciative audience.
AUTHOR BIOGRAPHY
David Rohrbacher is associate professor of classics at New College of Florida. He is the author of The Historians of Late Antiquity.
TABLE OF CONTENTS