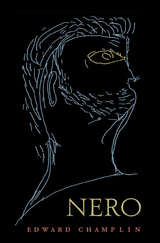 The Roman emperor Nero is remembered by history as the vain and immoral monster who fiddled while Rome burned. Edward Champlin reinterprets Nero's enormities on their own terms, as the self-conscious performances of an imperial actor with a formidable grasp of Roman history and mythology and a canny sense of his audience.

Nero murdered his younger brother and rival to the throne, probably at his mother's prompting. He then murdered his mother, with whom he may have slept. He killed his pregnant wife in a fit of rage, then castrated and married a young freedman because he resembled her. He mounted the public stage to act a hero driven mad or a woman giving birth, and raced a ten-horse chariot in the Olympic games. He probably instigated the burning of Rome, for which he then ordered the spectacular punishment of Christians, many of whom were burned as human torches to light up his gardens at night. Without seeking to rehabilitate the historical monster, Champlin renders Nero more vividly intelligible by illuminating the motives behind his theatrical gestures, and revealing the artist who thought of himself as a heroic figure.

Nero is a brilliant reconception of a historical account that extends back to Tacitus, Suetonius, and Cassius Dio. The effortless style and artful construction of the book will engage any reader drawn to its intrinsically fascinating subject.
TABLE OF CONTENTS
Contents
1. The Once and Future King
2. Stories and Histories
3. Portrait of the Artist
4. The Power of Myth
5. Shining Apollo
6. Saturnalia
7. One House
8. Triumph
Epilogue
Note on Sources
Bibliography
Notes
Acknowledgments
Illustration Credits
Index