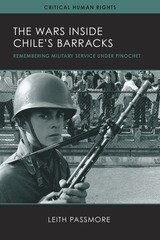 From 1973 to 1990 approximately 370,000 young men in Chile—most of them from impoverished backgrounds—were conscripted to serve as soldiers in Augusto Pinochet's violent regime. Some were brutal enforcers, but many endured physical and psychological abuse, survival and torture training, arbitrary punishments, political persecution, and forced labor. Leith Passmore examines the movement of ex-conscripts who sought reparations for their hardships in the early twenty-first century. Relying on unpublished material, testimony, interviews, and field notes, Passmore locates these individuals' narratives of victimhood at the intersection of long-term histories of patriotism, masculinity, and cyclical poverty.
AUTHOR BIOGRAPHY
Leith Passmore is a historian at the Universidad Andrés Bello in Santiago, Chile, and the author of Ulrike Meinhof and the Red Army Faction: Performing Terrorism.
REVIEWS
"With crisp prose and superb scholarship, Leith Passmore provides a groundbreaking exploration of the lives and memories of military conscripts under, and after, the seventeen-year rule of General Pinochet, South America's most famous violator of human rights in living memory."—Paul W. Drake, author of Between Tyranny and Anarchy


"Few books are able to capture, as this one does, the full complexity of the Pinochet dictatorship's horror. Passmore leads us, in magisterial fashion, into one of its darkest corners: the tortured memories of thousands of former conscripts transformed simultaneously into perpetrators and victims of the dictatorial nightmare."—Verónica Valdivia, author of El golpe después del golpe: Leigh vs Pinochet (1960–1980)


"Leith Passmore has written a compelling book about these veterans and the politics of national memory in Chile. . . . The Wars inside Chile's Barracks is a major contribution to the historiography of memory, military rule, and posttransition Chile."—Hispanic American Historical Review

Introduction: War and Memory
1 The Contours of Silence
2 A Movement
3 Defending la Patria
4 Making Men
5 In the Flesh
Conclusion: The Apolitics of Memory and the Limits of Human Rights