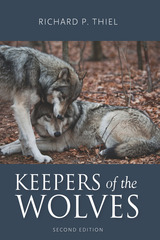 Keepers of the Wolves
by Richard P. Thiel
University of Wisconsin Press, 2018
Paper: 978-0-299-32074-4
It was 1978, and gray wolves had been extinct in Wisconsin for twenty years. Still, there were rumors from the state's northwestern counties that they had returned. Dick Thiel, then a college student with a passion for wolves, was determined to find out. Keepers of the Wolves is his engrossing account of tracking and protecting the recovery of wolves in Wisconsin. Thiel conveys the wonder, frustrations, humor, and everyday hard work of field biologists, including the political and public relations pitfalls they regularly face.

This new edition brings Thiel's story into the twenty-first century, recounting his work monitoring wolves as they spread to central Wisconsin, conflicts of wolves with landowners and recreationalists, changes in state and federal policies, the establishment of a state wolf-hunting season in 2012, and Thiel's forecast for the future of wolves in Wisconsin.
AUTHOR BIOGRAPHY
Richard P. Thiel is retired from a career with the Wisconsin Department of Natural Resources, where he was team chairman for Wisconsin's wolf recovery plan in the late 1980s and later managed the Sandhill Outdoor Skills Center in Babcock, Wisconsin. He is active with the Timber Wolf Information Network and the International Wolf Center. He is the author of The Timber Wolf in Wisconsin and coeditor of Wild Wolves We Have Known.
TABLE OF CONTENTS

Phantoms of the Forest
Beginnings
The First Winter
Dust, Mosquitoes, and a Few Collared Wolves
Trying Times
What’s in a Name?
Deer, the Wolf’s Bread (and Bane) of Life
All in the Family
Murphy’s Law
Boy, Would I Love Your Job!
They Shoot the Messenger, Don’t They?
Stepping Down and Moving On
The Wolves Return
Living with People
Epilogue