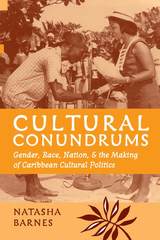 Cultural Conundrums investigates the passions of race, gender, and national identity that make culture a continually embattled public sphere in the Anglophone Caribbean today. Academics, journalists, and ordinary citizens have weighed in on the ideological meanings to be found in the minutiae of cultural life, from the use of skin-bleaching agents in the beauty rituals of working-class Jamaican women to the rise of sexually suggestive costumes in Trinidad’s Carnival.

Natasha Barnes traces the use of cultural arguments in the making of Caribbean modernity, looking at the cultural performances of the Anglophone Caribbean—cricket, carnival, dancehall, calypso, and beauty pageants—and their major literary portrayals.  Barnes historicizes the problematic linkage of culture and nation to argue that Caribbean anticolonialism has given expressive culture a critical place in the region’s identity politics. Her provocative readings of foundational thinkers C. L. R. James and Sylvia Winters will engender discussion and debate among the Caribbean intellectual community. This impressively interdisciplinary study will make important contributions to the fields of Afro-diaspora studies, postcolonial studies, literary studies, performance studies, and sociology.
“Postcolonial cultural criticism is celebrated for its mastery of generalization and condemned for its inability to historicize. Cultural Conundrums is unique in its ability to find a middle ground. It touches on some of the most important and contentious issues in the field. This book will account for why it was in those small islands that what we now call cultural studies was invented.”
--Simon Gikandi, Princeton University

Natasha Barnes is Associate Professor of African American Studies and English at the University of Illinois at Chicago.
TABLE OF CONTENTS