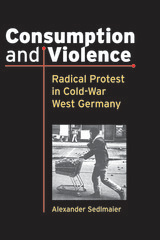 Combining the tools of political, social, cultural, and intellectual history, Consumption and Violence: Radical Protest in Cold-War West Germany explores strategies of legitimization developed by advocates of militant resistance to certain manifestations of consumer capitalism. The book contributes to a more sober evaluation of West German protest movements, not just terrorism, as it refrains from emotional and moral judgments, but takes the protesters’ approaches seriously, which, regarding consumer society, had a rational core. Political violence is not presented as the result of individual shortcomings, but emerges in relation to major societal changes, i.e., the unprecedented growth of consumption. This new perspective sheds important light on violence and radical protest in post-war Germany, as previous books have failed to examine to what extent these forms of resistance should be regarded as reactions to changing regimes of provision. Continuing the recently growing interest in the interdependence of countercultures and consumer society, the focus on violence gives the argument a unique twist, making the book thought-provoking and engaging.
AUTHOR BIOGRAPHY
Alexander Sedlmaier is Senior Lecturer in Modern History, School of History, Bangor University, Wales.
REVIEWS
"Consumption and Violence is a fascinating read for every scholar interested in left-wing counterculture, the history of West German postwar society and new approaches to the history of consumption."
--German History
— Benjamin Mockel, German History

"Makes a significant contribution to our understanding of the political battles over consumption in modern history, and more specifically of the role of Marxist ideas and revolutionary action in the 1960s and 1970s, just as the era of post-war ‘affluence’ was reaching its end."
--European History Quarterly
— Frank Trentmann, European History Quarterly