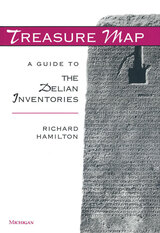 In the fourth century BC, the Athenians introduced to the sacred isle of Delos the habit of making marble inscriptions that noted inventories of goods in religious precincts. These inscriptions are now quite damaged and badly preserved, but they offer a trove of information about religious practice on this most unusual island. Richard Hamilton has tackled the difficult task of examining and analyzing these inscriptions and provides a wealth of information about the inventories and the island of Delos.


Hamilton offers detailed insight into the workings of one of the most important Greek sanctuaries, bringing together information that is otherwise widely scattered in a number of modern and ancient languages. He offers English translations of the inventories and presents extensive notes on objects recorded, on how the inventories were listed and weighed, and on aspects of Delian life and politics.


Treasure Map is a major resource for scholars and students of Greek religion and history, epigraphy, ancient economics, and politics.
AUTHOR BIOGRAPHY
Richard Hamilton is Paul Shorey Professor of Greek at Bryn Mawr College, and the author of Choes and Anthesteria, also published by the University of Michigan Press.

REVIEWS
"Hamilton’s work on ancient inventories is and will remain one of the fundamental studies of these complex and difficult texts. The author should be congratulated for providing historians and art historians with an important and timely tool that allows for a more nuanced reading of these documents, a better understanding of sanctuary administration, bureaucracy, and religion, and a reference work for those studying luxury arts."
--Phoenix Book Review
— Elizabeth Kosmetatou, Phoenix Book Review