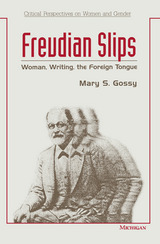 In Freudian Slips: Woman, Writing, the Foreign Tongue, Mary Gossy provides an original and provocative critique of language, sexuality, and the female body in Freud's The Psychopathology of Everyday Life.
Gossy believes that Freud's most popular statement of a theory of the unconscious is written over foreign and feminized texts, bodies, and places, by way of anecdotes that range from the Dora case to menstruation to travel phobias. Freudian Slips: Woman, Writing, the Foreign Tongue does a feminist psychoanalytic reading of Freud's book and shows how slippery- textually, erotically, and historically- the writing of theory can be, and also how much we can learn from our slips when we are willing to admit that we have made them.
Bringing together autobiography, psychoanalysis, close readings, pedagogy, and politics in provocative and innovative ways, Gossy discusses Freud's work from both textual and theoretical perspectives and asks what his writing can teach us about authority, theory, home, and the foreign. Arguing that the dominant metaphor in the Psychopathology is that of the female body as foreign text, and that this body, writing, and the foreign tongue are identified with a feminized unconscious that threatens authoritative discourse, Freudian Slips moves toward fashioning a feminist theory that is both "slippery and (para)practical" and constantly searches for ways of writing theory that free, rather than sacrifice, the bodies of women.
"The readings of individual slips are often highly productive; the argument is both hardworking and playful. Freudian Slips is a book that people will enjoy reading and from which they will learn a great deal."-- Helena Michie, Rice University
Mary S. Gossy is Associate Professor of Spanish and Comparative Literature, Rutgers University. She is the author of The Untold Story: Women and Theory in Golden Age Texts.
REQUEST ACCESSIBLE FILE