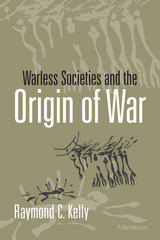 Warless Societies and the Origin of War employs a comparative ethnographic analysis of warless and warlike hunting and gathering societies to isolate distinctive features of peaceful preagricultural people and to develop a theoretical model of the origin of war and the early coevolution of war and society. Examining key Upper Paleolithic cave paintings and burials that document lethal violence, Raymond Kelly's illumination of the transition from warlessness to warfare in several specific locales in Europe and the Middle East confounds understandings of the origin of war prevalent today.
Kelly addresses fundamental questions concerning the trinity of interrelationship between human nature, war, and the constitution of society: Is war a primordial and pervasive feature of human existence or a set of practices that arose at a certain time in our recent prehistoric past? Are there peaceful societies in which war is absent and, if so, what are they like and how do they differ from warlike societies? Do the critical differentiating features pertain to child-rearing practices, to modes of conflict resolution, to social and economic inequality, to resource competition, or to the constitution of social groups?
As the conclusions of such an inquiry are central to our conceptions of human nature, the book will interest a wide range of readers, from those curious about the origins of collective violence to those studying the roles social institutions play in society.
Raymond C. Kelly is Professor of Anthropology, University of Michigan.
REQUEST ACCESSIBLE FILE