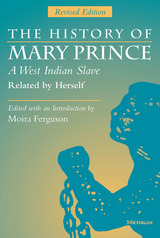 The History of Mary Prince, A West Indian Slave, Related by Herself: Revised Edition
edited by Moira Ferguson
by Mary Prince
University of Michigan Press, 1997
Paper: 978-0-472-08410-4
Mary Prince was the first black British woman to escape from slavery and publish a record of her experiences. In this unique document, Mary Prince vividly recalls her life as a slave in Bermuda, Turks Island, and Antigua, her rebellion against physical and psychological degradation, and her eventual escape to London in 1828.
First published in London and Edinburgh in 1831, and well into its third edition that year, The History of Mary Prince inflamed public opinion and created political havoc. Never before had the sufferings and indignities of enslavement been seen through the eyes of a woman--a woman struggling for freedom in the face of great odds.
Moira Ferguson's edition of the book added an introduction, annotations, and appendices. The book has found popularity both in the classroom and with the general public. Recently, an adaptation of the memoirs of Mary Prince appeared as one segment of "A Skirt Through History," a six-part feature film series produced by the BBC. Mary Prince's story has also been the centerpiece of BBC radio broadcasts.
In this revised and expanded edition of The History of Mary Prince, Ferguson has added new material, based on her extensive research in Bermuda and London. The book includes new details of Mary Prince's experiences as a freewoman in England, the transcripts of several libel cases brought against her, and the reactions of British society, as seen in prominent periodicals of the day, against the original publication of The History of Mary Prince. This new material brings greater depth and detail and serves to more fully illustrate and contextualize the life of this remarkable woman.
Moira Ferguson is James E. Ryan Professor of English and Women's Literature, University of Nebraska.
REQUEST ACCESSIBLE FILE