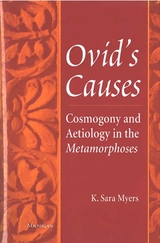 Ovid's Causes: Cosmogony and Aetiology in the Metamorphoses
by K. Sara Myers
University of Michigan Press, 1994
Cloth: 978-0-472-10459-8
Ovid’s Causes offers a new reassessment of the poet’s longest and most difficult poem, the Metamorphoses. This poem has long been denied epic stature because of its stylistic and thematic diversity. K. Sara Myers demonstrates that the poem must be understood as the inheritor and interpreter of the Roman tradition of cosmological epic. She situates the poem in the traditions and conventions of Roman poetry and considers the ways in which it both fulfills and overturns the expectations of the epic genre.

This illuminating study presents much useful material for students of Roman poetry or of Greek literary influences that profoundly influenced its development. Students and scholars of ancient poetical traditions will likewise find much of interest.
REVIEWS
". . . makes a solid case for Ovid's association of the Metamorphoses with the dual traditions of cosmological epic and aetiological elegy. . . . And Myers's sensitive treatment of Ovid's manipulation of truth and fiction certainly should be welcomed by both a specialist and a general audience."
--Bryn Mawr Classical Review
— Bryn Mawr Classical Review

". . . a highly stimulating book. It is full of interesting ideas and interpretations (too many to mention) and provides a rich and up-to-date bibliography. . . . [This] is surely the most effective account of the debt the Metamorphoses owes to its Hellenistic sources for aetiology and metamorphosis."
--Classical Review
— Classical Review