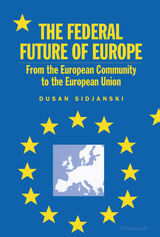 The Federal Future of Europe: From the European Community to the European Union
by Dusan Sidjanski
University of Michigan Press, 2000
Cloth: 978-0-472-11075-9
The European Union is building step-by-step a new federal system based on states, nations, and regions. In his authoritative and comprehensive book, Dusan Sidjanski describes the formation of the original European Community and the dynamics of the process of integration that has brought the Union to its current state. He then provides a sophisticated analytic framework for considering the future of the Union.
The author argues that federalism is the best antidote to the reemergence of nationalism in Europe. It is also the best guarantee for a peaceful community that balances the claims of national, regional, and local identity against the need for large-scale economies that springs from the forces of globalization, competition, and technical change. The Union preserves diversity within a flexible and innovating European system.
This major study of the development of the European project, informed by a thorough knowledge of the Community and Union over the years and by deep understanding of the relevant literatures in political science and political economy is important for all who study the European Union or work with it as officials and business people.
Dusan Sidjanski is founder and Professor Emeritus of the Department of Political Science, University of Geneva and Professor Emeritus, European Institute. He has authored numerous publications, most recently, The ECE in the Age of Change (United Nations Economic Commission for Europe, United Nations).
REQUEST ACCESSIBLE FILE