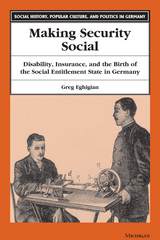 While welfare has been subject to pronounced criticism throughout the twentieth century, social insurance has consistently enjoyed the overwhelming support of European policy makers and citizens. This volume argues that the emergence of social insurance represents a paradigmatic shift in modern understandings of health, work, political participation, and government. By institutionalizing compensation, social insurance transformed it into a right that the employed population quickly came to assume.
Theoretically informed and based on intensive archival research on disability insurance records, most of which have never been used by historians, the book considers how social science and political philosophy combined to give shape to the idea of a "social" insurance in the nineteenth century; the process by which social insurance gave birth to modern notions of "disability" and "rehabilitation"; and the early-twentieth-century development of political action groups for the disabled.
Most earlier histories of German social insurance have been legislative histories that stressed the system's coercive features and functions. Making Security Social, by contrast, emphasizes the administrative practices of everyday life, the experience of consumers, and the ability of workers not only to resist, but to transform, social insurance bureaucracy and political debate. It thus demonstrates that social insurance was pivotal in establishing a general attitude of demand, claim, and entitlement as the primary link between the modern state and those it governed.
In addition to historians of Germany, Making Security Social will attract researchers across disciplines who are concerned with public policy, disability studies, and public health.
Greg Eghigian is Associate Professor of History, Penn State University.
TABLE OF CONTENTS
Contents
List of Figures
List of Tables
Acknowledgments
List of Abbreviations
1. Introduction: Social Security, Rationality, and the German Welfare State
2. Insurance Becomes Social Policy: The Sources of Social Concern in Nineteenth-Century Germany
3. Embodied Entitlement: The Policy, Practice, and Politics of Disability Compensation, 1884–1914
4. The Regenerative Welfare State: Therapy, Work, and the Birth of Rehabilitation, 1884–1914
5. War, Revolution, and Care for the Disabled, 1914–21
6. The Inflation of Social Entitlement, 1918–27: Sacrifice and the Politics of Victimization
7. The Rise of the Degenerative Welfare State: A Genealogy of the Backlash against Weimar Social Policy, 1889–1933
8. Conclusion: Social Security and the Politics of Entitlement in Twentieth-Century Germany
Select Bibliography
Index
REQUEST ACCESSIBLE FILE