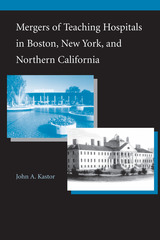 If a teaching hospital loses funding, what is the next option?

Mergers of Teaching Hospitals in Boston, New York, and Northern California investigates the recent mergers of six of the nation's most respected teaching hospitals. The author explains the reasons why these institutions decided to change their governance and the factors that have allowed two of them to continue to operate while forcing the third to dissolve after only 23 months of operation.

The case studies contained within this book rely on an impressive amount of research. Notably, instead of citing only published articles and books, the author includes information from numerous, extensive personal interviews with key participants in the various mergers. With this research the author not only presents to the reader a picture of why these mergers came about, but also investigates how the organizations have fared since joining together. The mergers are analyzed and compared in order to identify various methods of merger formation as well as ways in which other newly formed hospitals might accomplish a variety of important goals.

Offering a spectacular account of some of the mergers that occurred in the health care field at the close of the twentieth century, these stories provide insight into academia's relationship with teaching hospitals and the challenges involved in bringing prestigious and powerful medical institutions together. The institutions discussed are Partners, the corporation which includes the Massachusetts General Hospital and the Brigham and Women's Hospital, New York-Presbyterian Hospital, the union of the New York and Presbyterian hospitals in New York City, and the UCSF Stanford, the merged teaching hospitals of the University of California, San Francisco and Stanford. This book will particularly appeal to professionals and academics interested in medicine, business, and organizational studies.