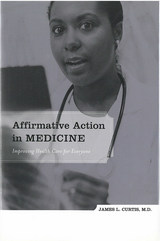 Affirmative action programs have significantly changed American medicine for the better, not only in medical school admissions and access to postgraduate training but also in bringing a higher quality of health care to all people. James L. Curtis approaches this important transition from historical, statistical, and personal perspectives. He tells how over the course of his medical education and career as a psychiatrist and professor--often as the first or only African American in his cohort--the status of minorities in the medical professions grew from a tiny percentage to a far more equitable representation of the American population.
Advancing arguments from his earlier book, Blacks, Medical Schools, and Society, Curtis evaluates the outcomes of affirmative action efforts over the past thirty years. He describes formidable barriers to minority access to medical-education opportunities and the resulting problems faced by minority patients in receiving medical treatment. His progress report includes a review of two thousand minority students admitted to U.S. medical schools in 1969, following them through graduation and their careers, comparing them with the careers of two thousand of their nonminority peers. These samples provide an important look at medical schools that, while heralding dramatic progress in physician education and training opportunity, indicates much room for further improvement.
A basic hurdle continues to face African Americans and other minorities who are still confined to segregated neighborhoods and inferior school systems that stifle full scholastic development. Curtis urges us as a nation to develop all our human resources through an expansion of affirmative action programs, thus improving health care for everyone.
James L. Curtis is Clinical Professor Emeritus of Psychiatry, Columbia University College of Physicians and Surgeons.
TABLE OF CONTENTS