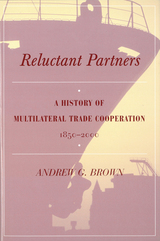 With globalization drawing countries closer together, greater international cooperation is essential for peace and stability. The collective arrangement made by governments to manage their trade relations is one of the few successes of globalization. This book assesses the progress of multilateral trade cooperation, exploring the interests at work and the issues raised in successive postwar rounds of negotiations. It traces how the narrow perception of reciprocity has gradually yielded to a broader evaluation of the benefits to the regime as a whole as the major trading nations have mutually reduced trade barriers. Andrew G. Brown demonstrates the increasing importance of rule making and shows the diversity of issues on which negotiations have focused, such as customs procedures, technical standards, subsidies, anti-dumping duties, intellectual property rights, and the treatment of foreign direct investment. Despite the progress, however, the regime has remained vulnerable. The book also analyzes the major sources of strain that have been evident.
This is a nontechnical book for those curious about the possibilities for cooperation among states and should be of interest to both the nonspecialist and the specialist. It draws on more than one discipline to interpret the events, lying in the triangle bounded by political science, economics, and history.
Andrew G. Brown is a former Director of the General Analysis and Policies Division for the United Nations, New York.
TABLE OF CONTENTS
Contents
List of Tables
Acknowledgments
Introduction
1. What Shapes National Trade Policy
2. Making Trade Relations Work
3. Trade Cooperation before 1914
4. The Failed Attempts of the Interwar Years
5. The Founding of the Postwar System
6. The First Twenty-Five Years of the New Trade Regime
7. The Turbulent Decades of the 1970s and 1980s
8. The Developing Countries: Changing Attitudes toward Trade Policy
9. The Uruguay Round
10. Regional Trading Arrangements and Multilateral Cooperation
11. From Marrakech to Seattle
12. Epilogue
Appendix: Some Relevant Academic Research on Multilateral Trade Cooperation
Notes
References
Index
REQUEST ACCESSIBLE FILE