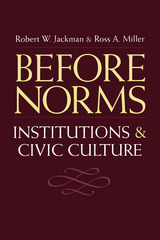 The potato famines of the nineteenth century were long attributed to Irish indolence. The Stalinist system was blamed on a Russian proclivity for autocracy. Muslim men have been accused of an inclination to terrorism. Is political behavior really the result of cultural upbringing, or does the vast range of human political action stem more from institutional and structural constraints?
This important new book carefully examines the role of institutions and civic culture in the establishment of political norms. Jackman and Miller methodically refute the Weberian cultural theory of politics and build in its place a persuasive case for the ways in which institutions shape the political behavior of ordinary citizens. Their rigorous examination of grassroots electoral participation reveals no evidence for even a residual effect of cultural values on political behavior, but instead provides consistent support for the institutional view. Before Norms speaks to urgent debates among political scientists and sociologists over the origins of individual political behavior.
Robert W. Jackman is Professor of Political Science at the University of California, Davis. Ross A. Miller is Associate Professor of Political Science at Santa Clara University.
TABLE OF CONTENTS