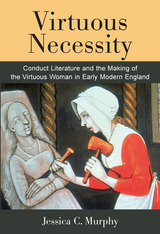 While many scholars find the early modern triad of virtues for women—silence, chastity, and obedience—to be straightforward and nonnegotiable, Jessica C. Murphy demonstrates that these virtues were by no means as direct and inflexible as they might seem. Drawing on the literature of the period—from the plays of Shakespeare to a conduct manual written for a princess to letters from a wife to her husband—as well as contemporary gender theory and philosophy, she uncovers the multiple meanings of behavioral expectations for sixteenth- and seventeenth-century women. Through her renegotiation of cultural ideals as presented in both literary and nonliterary texts of early modern England, Murphy presents models for “acceptable” women’s conduct that lie outside of the rigid prescriptions of the time.


Virtuous Necessity will appeal to readers interested in early modern English literature, including canonical authors such as Shakespeare, Spenser, and Milton, as well as their female contemporaries such as Amelia Lanyer and Elizabeth Cary. It will also appeal to scholars of conduct literature; of early modern drama, popular literature, poetry, and prose; of women’s history; and of gender theory.
AUTHOR BIOGRAPHY
Jessica C. Murphy is Associate Professor of Literary Studies at the University of Texas at Dallas and UT Dallas Project Manager for the English Broadside Ballad Archive.
TABLE OF CONTENTS
Contents
Acknowledgments
Introduction
1. The Paradox of Chastity
2. “Honest Government”: Feminine Virtue’s Network of Influence in Early Modern England
3. Contradiction and Counter-Magic: Advice to Women on Shakespeare’s Stage
4. Virtue in Early Modern Women’s Advice
5. “Advice to the Ladies of London”: Feminine Virtue in English Broadside Ballads
Epilogue
Notes
Bibliography
Index
REQUEST ACCESSIBLE FILE