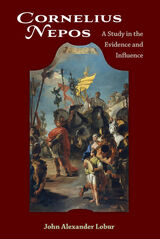 Roman author Cornelius Nepos wrote at a very dynamic time in Roman history, but oddly enough little has been said about what his surviving work as a whole can tell us about that period. In the scholarship of the nineteenth and twentieth centuries, the author was much maligned as inaccurate, simple-minded, and derivative, and thus it has been hard to make the case that the evidence he provides is important or even useful. John Lobur’s work rehabilitates Nepos to show that in fact he should be understood as an emblematic member of the Italian intelligentsia, one well-positioned to write narratives of great potency with respect to the ideological tenor of emerging Roman imperial culture.

Cornelius Nepos: A Study in the Evidence and Influence begins by exploring the writer's ancient reception, which suggests he was in no way seen as beneath consideration by the Romans themselves. The volume then deconstructs the critical framework that cast him as an "inferior" author in the classical canon. What emerges is an author who reworked Greek historical narratives in a learned, sophisticated way, yet one still limited by the compositional logistics and limitations inherent in ancient scholarship. The study then explores his contemporary relationships and embeds his work among the crucial ideological activity at play in the late Republic and Triumviral periods. Cornelius Nepos spends considerable time on the fragmentary evidence (which highlights Nepos' interest in changes in fashion and consumption) to suggest that he was a valued cultural elder who informed a public eager to recover a sense of tradition during a period of bewilderingly fast social and cultural change. The book finishes with a thematic examination of the entire Lives of the Foreign Commanders (a set of biographies on ancient non-Roman generals) to show that despite the expression of very “Republican” sentiments, he was in fact fashioning an ideological framework for something imperial and quasi-monarchic which, though autocratic, was still antityrannical and imagined as resting on a broad and “democratic” foundation of social consent. Nepos saw that Rome would soon be ruled by one person, and his biographies show how the elites of the day both processed that reality and attempted to circumscribe it for good ends through the creation of new models of legitimacy.
AUTHOR BIOGRAPHY

John Alexander Lobur is Associate Professor of Classics at the University of Mississippi.

Chapter 2: Error and Accuracy in Nepos.
I: The Origin of a Skewed View.
II: Errors in Plain Sight?
III: The Limits of Memory and the Purpose of Biography.
IV: Projecting Expectations.
V: Source or Inventio?
VI: The Infinite Generation of Errors.

Chapter 3: The Sources of a Learned Biographer.
I: Nepos' Mastery of Greek.
II: The Direct Use of Sources.
III:  A New Picture of Nepos the Scholar.

Chapter 5: The Fragments of Nepos and their Cultural-Ideological Context.
I: Nepos in the wider Discourse of Roman Decadence.
II: Nepos as Elder.
III: Nepos and the New Archaic Lifestyle.
IV: Nepos and Cato the Elder.
V: Nepos at the Intersection of Culture and Power.

Chapter 6: Cornelius Nepos and Triumviral Political Ideology.
I. Introduction: Nepos and the Transition from Republic to Empire.
II: A "Just" Tyrant? The Miltiades.
III: The Anti-triumviral, Anti-tyrannical Stance of the Thrasybulus.
IV: Tyranny and Faction in the Alcibiades, Phocion and Dion.
V: Obedient Generals: Agesilaus, Epaminondas, Scipio Africanus and the Senate.
VI: Nepos and the Political Environment at Rome.

Chapter 7: Cornelius Nepos and the Articulation of Political Etiquette.
I: The Extraordinary Nature of Nepos' Generals.
II: Managing Fear and Resentment in the Lives.
III: The Timoleon: A Literary Model for the Principate.
IV: Recusatio, Modestia and other Points of Contact with Imperial Ideology.

Chapter 8: Concluding Remarks.
I. A Paradigm Shift for Nepos.
II. Nepos' Vocabulary of Leadership and its Applicability to Roman Experience.
III. Nepos and the Articulation of Imperial Ideology.