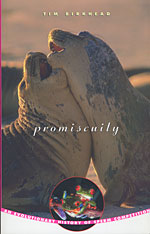 Males are promiscuous and ferociously competitive.Females--both human and of other species--are naturally monogamous. That at least is what the study of sexual behavior after Darwin assumed, perhaps because it was written by men. Only in recent years has this version of events been challenged. Females, it has become clear, are remarkably promiscuous and have evolved an astonishing array of strategies, employed both before and after copulation, to determine exactly who will father their offspring.

Tim Birkhead reveals a wonderful world in which males and females vie with each other as they strive to maximize their reproductive success. Both sexes have evolved staggeringly sophisticated ways to get what they want--often at the expense of the other. He introduces us to fish whose first encounter locks them together for life in a perpetual sexual embrace; hermaphrodites who "joust" with their reproductive organs, each trying to inseminate the other without being inseminated; and tiny flies whose seminal fluid is so toxic that it not only destroys the sperm of rival males but eventually kills the female. He explores the long and tortuous road leading to our current state of knowledge, from Aristotle's observations on chickens, to the first successful artificial insemination in the seventeenth century, to today's ingenious molecular markers for assigning paternity. And he shows how much human behavior--from the wife-sharing habits of Inuit hunters to Charlie Chaplin's paternity case--is influenced by sperm competition.

Lucidly written and lavishly illustrated, with a wealth of fascinating detail and vivid examples, Promiscuity is the ultimate guide to the battle of the sexes.

Reviews of this book:
Birkhead...has written an engrossing, accessible explanation of sperm competition and related elements of animal biology. Birkhead succeeds on two levels at once. He sets out evolutionists' arguments about sperm competition and sexual selection, and shows how their hypotheses have been tested. He also offers a fantastic array of biological believe-it-or-nots. [His] work is solid and intriguing, a clear picture of many out-there phenomena; no one who cares for biology should miss it.
--Publishers Weekly

Reviews of this book:
[Darwin] didn't expand on...promiscuity in females...but Tim Birkhead more than makes up for Darwin's omission. Promiscuity is a fascinating, wide-ranging, erudite, readable journey through some of the weirder stretches of biology.
--A. H. Harcourt, Nature

Reviews of this book:
[A] fascinating story of a revolution in evolutionary biology. Until recently, biologists and cigar-toting males who haunt singles bars would have agreed that the reproductive act is what it's about. That may still be the case for singles-bar louts, but biologists now know the Darwinian struggle to reproduce does not end with copulation. "Generations of reproductive biologists assumed females to be sexually monogamous," Birkhead writes, but recently they've found that in many species of insects, birds and reptiles, females are highly promiscuous...These new findings demolish the idea that reproduction is a warm, romantic collaboration. "This is real sexual conflict: the battle of the sexes," Birkhead says,; males and females are out to get "the best, selfish genetic deal they can get." The battle of the sexes is an old story, but the idea that it continues after copulation, in the microscopic arena of sperm and eggs, is distinctly new...As the battle of the sexes continues, Birkhead's provocative book is a reminder of how little we know.
--Paul Raeburn, New York Times Book Review

Reviews of this book:
Darwin's evolutionary theory, as originally presented, taught the importance of, and the powerful results of, the processes of sexual selection. However, according to...Birkhead, Darwin's attention stopped short at mate selection. This current work takes the study of sexual selection to yet another level...[Promiscuity is] quite readable and engaging...Birkhead is an excellent, clear writer and this approach allows even non-biologists to learn much about his subject. Certainly, the book will stimulate the reader to consider the meaning of male-female relationships in a new light.
--Keith S. Harris, Metapsychology

A century after Darwin originated the concept of sexual selection, an explosion of research began on the topic. Tim Birkhead has documented a fascinating part of this explosion; a part that Darwin did not discuss--namely adaptations taking effect after mating: sperm competition and sperm selection, and the associated battles of the sexes. Birkhead's account is riveting--it will captivate everyone, not only for its scintillating and easy presentation of the biology, but for its portrayal of some of the dramas, personalities, and social pressures that shaped the directions of the research.
--Professor G. A. Parker, Population & Evolutionary Biology Research Group, Nicholson Building, The University of Liverpool

Darwin explained why males evolve weapons to conquer rivals and ornaments to charm mates. But this is only half the story. Tim Birkhead shows how conflicts continue after copulation inside the female reproductive tract, which provides an extraordinary obstacle course where sperm from different males often battle for paternity. This is a marvellous and lucid survey, from bed-bugs to humans. If you want to know why sex is so complicated, read this book and give your brain a treat.
--Nick Davies, Professor of Behavioural Ecology, University of Cambridge

Tim Birkhead has written an engaging, popular account of the ultimate battle between the sexes, the contest to see whose sperm wins the race to fertilise the egg. This warfare shapes the reproductive lives of the lowly dungfly, the spawning salmon, the mating frog, the flirtatious zebra finch, the sneaky rutting stag and the cuckolding courtesan. But the female exploits the male to her own advantage in the end. This excellent book will leave you in no doubt that Kipling was right when he declared that the female of the species is more deadly than the male.
--Professor Roger Short, Royal Women's Hospital, Australia

At last: a book that lives up to its title! Real biology, not pseudo-science; clear, convincing and a welcome absence of speculation.
--Steve Jones, author of Almost Like a Whale, The Language of Genes and In the Blood

This is a well-written, entertaining, and quite interesting book. It's the best introduction I know of to an important and controversial topic in evolutionary biology.
--Lee Dugatkin, author of Cheating Monkeys and Citizen Bees

The recent appreciation of the fact that females in many species mate hundreds of times, often with various males, is a problem for traditional views of animal sexuality. Tim Birkhead's tour of the new data is studded with bizarre adaptations and quirky behaviors, but its strength lies in his elegant account of the science and its puzzles-- some solved, others still mysterious. Promiscuity is a wonderfully fresh account--equally invaluable for students of evolutionary biology and ribald after-dinner speakers.
--Richard Wrangham, Peabody Museum, Harvard University

A delightfully written and fascinating tour of the mysterious world of sperm competition and sexual conflict. Birkhead has done a masterful job at engaging the reader with background stories of the key players as the scientific dramas from Darwin on have unfolded, while maintaining the highest standards of scientific balance and accuracy. The book is informative, disturbing, and never boring. After reading this book, you will never think about human mating in quite the same way.
--David M. Buss, author of The Evolution of Desire: Strategies of Human Mating and The Dangerous Passion: Why Jealousy is as Necessary as Love and Sex

By viewing males and females as each having their own agenda, the choices underlying reproduction become far more complex than previously thought. Tim Birkhead offers a highly readable account of the decisions involved, and the many adaptations found in nature. He also presents a sober-minded evaluation of sperm competition, which is a relief after the hype and exaggeration by others.
--Frans de Waal, author of Good Natured and Bonobo: The Forgotten Ape

Tim Birkhead's excellent book tells us almost everything we always wanted to know about the evolution of sex. It also gives us a fascinating account of the sometimes tortuous paths that have led to scientific discoveries of sexual strategies.
--Bert HÃƒÂ¶lldobler, University of WÃƒÂ¼rzburg, Germany

Birds do it, bees do it, and they mostly do it more than once. Female promiscuity and male sperm competition are rife in the animal kingdom. Tim Birkhead guides us through the unseen side of the battle of the sexes. He has complete authority within the literature produced by earnest research, and an easy style that conveys his own fascination with what really determines whose genes make it into the next generation. Whether you read this book as a work of science or as a late night excursion into the wild world of a fruit fly with sperm 38 times the length of its body and scientists wading knee-deep in mating garter snakes, it is likely to give you a whole new view of the facts of life.
--Alison Jolly, author of Lucy's Legacy