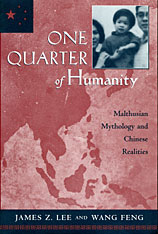 One Quarter of Humanity presents evidence about historical and contemporary Chinese population behavior that overturns much of the received wisdom about the differences between China and the West. James Lee and Wang Feng argue that there has been effective regulation of population growth in China through a variety of practices that depressed marital fertility to levels far below European standards, and through the widespread practices of infanticide and abortion. These practices and other distinctive features of the Chinese demographic and social system, they argue, led to a different demographic transition in China from the one that took place in the West.
TABLE OF CONTENTS
Contents
I. Mythologies
1. Introduction
2. Malthusian Myths
II. Realities
3. Subsistence
4. Mortality
5. Marriage
6. Fertility
III. Implications
7. System
8. Society
9. Demography, Ideology, and Politics
Appendix: Chinese Population Sources, 1700-2000
Notes
References
Index