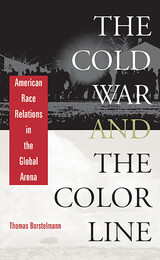 After World War II the United States faced two preeminent challenges: how to administer its responsibilities abroad as the world’s strongest power, and how to manage the rising movement at home for racial justice and civil rights. The effort to contain the growing influence of the Soviet Union resulted in the Cold War, a conflict that emphasized the American commitment to freedom. The absence of that freedom for nonwhite American citizens confronted the nation’s leaders with an embarrassing contradiction.

Racial discrimination after 1945 was a foreign as well as a domestic problem. World War II opened the door to both the U.S. civil rights movement and the struggle of Asians and Africans abroad for independence from colonial rule. America’s closest allies against the Soviet Union, however, were colonial powers whose interests had to be balanced against those of the emerging independent Third World in a multiracial, anticommunist alliance. At the same time, U.S. racial reform was essential to preserve the domestic consensus needed to sustain the Cold War struggle.

The Cold War and the Color Line is the first comprehensive examination of how the Cold War intersected with the final destruction of global white supremacy. Thomas Borstelmann pays close attention to the two Souths—Southern Africa and the American South—as the primary sites of white authority’s last stand. He reveals America’s efforts to contain the racial polarization that threatened to unravel the anticommunist western alliance. In so doing, he recasts the history of American race relations in its true international context, one that is meaningful and relevant for our own era of globalization.

REVIEWS
[Borstelmann traces] the constellation of racial challenges each administration faced (focusing particularly on African affairs abroad and African American civil rights at home), rather than highlighting the crises that made headlines...By avoiding the crutch of "turning points" for storytelling convenience, he makes a convincing case that no single event can be untied from a constantly thickening web of connections among civil rights, American foreign policy, and world affairs.
-- Jesse Berrett Village Voice


Borstelmann...analyzes the history of white supremacy in relation to the history of the Cold War, with particular emphasis on both African Americans and Africa. In a book that makes a good supplement to Mary Dudziak's Cold War Civil Rights, he dissects the history of U.S. domestic race relations and foreign relations over the past half-century...This book provides new insights into the dynamics of American foreign policy and international affairs and will undoubtedly be a useful and welcome addition to the literature on U.S. foreign policy and race relations. Recommended.
-- Edward G. McCormack Library Journal


In rich, informing detail enlivened with telling anecdote, Cornell historian Borstelmann unites under one umbrella two commonly separated strains of the U.S. post-WWII experience: our domestic political and cultural history, where the Civil Rights movement holds center stage, and our foreign policy, where the Cold War looms largest...No history could be more timely or more cogent. This densely detailed book, wide ranging in its sources, contains lessons that could play a vital role in reshaping American foreign and domestic policy.
-- Publishers Weekly

TABLE OF CONTENTS
CONTENTS
Preface
Prologue
1. Race and Foreign Relations before 1945
2. Jim Crow’s Coming Out
3. The Last Hurrah of the Old Color Line
4. Revolutions in the American South and Southern Africa
5. The Perilous Path to Equality
6. The End of the Cold War and White Supremacy
Epilogue
Notes
Archives and Manuscript Collections
Index