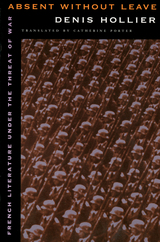 BUY FROM
Absent without Leave: French Literature under the Threat of War
by Denis Hollier
Harvard University Press, 1997
Paper: 978-0-674-21271-8
Cloth: 978-0-674-21270-1
eISBN: 978-0-674-26448-9
They were not the "Banquet Years," those anxious wartime years when poets and novelists were made to feel embarrassed by their impulse to write literature. And yet it was the attitude of those writers and critics in the 1930s and 1940s that shaped French literature--the ideas of Derrida, Foucault, de Man, Deleuze, and Ricoeur--and has so profoundly influenced literary enterprise in the English-speaking world since 1968. This literary history, the prehistory of postmodernism, is what Denis Hollier recovers in his interlocking studies of the main figures of French literary life before the age of anxiety gave way to the era of existentialist commitment.

Georges Bataille, Michel Leiris, Roger Caillois, André Malraux, the early Jean-Paul Sartre are the figures Hollier considers, writers torn between politics and the pleasures of the text. They appear here uneasily balancing the influences of the philosopher and the man of action. These studies convey the paradoxical heroism of writers fighting for a world that would extend no rights or privileges to writers, writing for a world in which literature would become a reprehensible frivolity. If the nineteenth century was that of the consecration of the writer, this was the time for their sacrificial death, and Hollier captures the comical pathos of these writers pursuing the ideal of "engagement" through an exercise in dispossession. His work identifies, as none has before, the master plot for literature that was crafted in the 1940s, a plot in which we are still very much entangled.