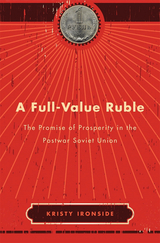 A new history shows that, despite Marxism’s rejection of money, the ruble was critical to the Soviet Union’s promise of shared prosperity for its citizens.

In spite of Karl Marx’s proclamation that money would become obsolete under Communism, the ruble remained a key feature of Soviet life. In fact, although Western economists typically concluded that money ultimately played a limited role in the Soviet Union, Kristy Ironside argues that money was both more important and more powerful than most histories have recognized. After the Second World War, money was resurrected as an essential tool of Soviet governance. Certainly, its importance was not lost on Soviet leaders, despite official Communist Party dogma. Money, Ironside demonstrates, mediated the relationship between the Soviet state and its citizens and was at the center of both the government’s and the people’s visions for the maturing Communist project. A strong ruble—one that held real value in workers’ hands and served as an effective labor incentive—was seen as essential to the economic growth that would rebuild society and realize Communism’s promised future of abundance.

Ironside shows how Soviet citizens turned to the state to remedy the damage that the ravages of the Second World War had inflicted upon their household economies. From the late 1940s through the early 1960s, progress toward Communism was increasingly measured by the health of its citizens’ personal finances, such as greater purchasing power, higher wages, better pensions, and growing savings. However, the increasing importance of money in Soviet life did not necessarily correlate to improved living standards for Soviet citizens. The Soviet government’s achievements in “raising the people’s material welfare” continued to lag behind the West’s advances during a period of unprecedented affluence. These factors combined to undermine popular support for Soviet power and confidence in the Communist project.

REVIEWS
Ironside contests the view that money had limited value in the Soviet system. She demonstrates that Soviet postwar governments were very concerned with increasing the ruble’s purchasing power as a means to economic growth and eventual abundance. This goal, however, remained unfulfilled. By examining political leaders’ beliefs, economic experts’ debates, and citizens’ complaints to the authorities, Ironside shows how a variety of economic policies introduced in the decades after World War II repeatedly led to the accumulation of unspendable money in the hands of the people.
-- Maria Lipman Foreign Affairs


A brilliant piece of research, equally useful for historians and economists…It offers a path-breaking narrative that expands on established economic models of central planning such as soft budget constraints, shortages and slacks, worker behavior under socialism and economic coordination…A must read for economists ready to take risks in interdisciplinary research and for historians willing to undertake cutting-edge research interactions with quantitative social science.
-- Theocharis Grigoriadis H-Net Reviews


Fascinating…Ironside’s highly original book fills in so many important gaps in the scholarship and offers so many insights into Soviet politics and economics that it deserves to be read by all serious students of the postwar USSR.
-- Julie Hessler Soviet and Post-Soviet Review


Even in an overwhelmingly state-owned, price-controlled economy [like the Soviet Union], it was hard to get [Modern Monetary Theory]-like policies to work, and even their successes came at high cost to consumer welfare, labor productivity and public opinion. [Ironside] has done a great service in illuminating this little-known experience. It should be required reading for anyone contemplating MMT.
-- Kent Osband Central Banking


A masterful account of Stalin’s and Khrushchev’s lost battle to bring prosperity to the Soviet people and state through the strengthening of the ruble.
-- Elena Osokina, author of Stalin’s Quest for Gold: The Torgsin Hard-Currency Shops and Soviet Industrialization


As Ironside shows so convincingly in this highly original account, Soviet leaders and experts saw the politics of the ruble and the role of money as crucial to their efforts to engineer a better society. An excellent, exciting contribution to the new history of political economy, with implications for other welfare states and the history of inequality far beyond the Soviet Union.
-- Vanessa Ogle, author of The Global Transformation of Time: 1870–1950


How should socialists deal with money? In A Full-Value Ruble, Kristy Ironside examines the dilemmas posed by money in the postwar Soviet Union. Though Bolshevik leaders promised that communism would produce universal abundance, the postwar Soviet Union faced severe scarcity. So money decided who got what. From prices to pensions, from bread allowances to savings bonds, Ironside shows how monetary debates were fundamental to defining the Soviet social and economic order. A Full-Value Ruble revolutionizes our understanding of Soviet political economy. And in doing so, it poses profound questions about the meaning of money in our society, too.
-- Chris Miller, author of Putinomics: Power and Money in Resurgent Russia


An important entry in the literature on the economic history of the Soviet Union, charting post–World War II efforts by Stalin and then Khrushchev to offer Soviet citizens a kind of consumer prosperity after years of economic upheaval and total war…Impressively researched.
-- David Woodruff Business History Review