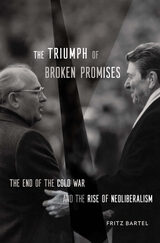 A powerful case that the economic shocks of the 1970s hastened both the end of the Cold War and the rise of neoliberalism by forcing governments to impose austerity on their own people.

Why did the Cold War come to a peaceful end? And why did neoliberal economics sweep across the world in the late twentieth century? In this pathbreaking study, Fritz Bartel argues that the answer to these questions is one and the same. The Cold War began as a competition between capitalist and communist governments to expand their social contracts as they raced to deliver their people a better life. But the economic shocks of the 1970s made promises of better living untenable on both sides of the Iron Curtain. Energy and financial markets placed immense pressure on governments to discipline their social contracts. Rather than make promises, political leaders were forced to break them.

In a sweeping narrative, The Triumph of Broken Promises tells the story of how the pressure to break promises spurred the end of the Cold War. In the West, neoliberalism provided Western leaders like Ronald Reagan and Margaret Thatcher with the political and ideological tools to shut down industries, impose austerity, and favor the interests of capital over labor. But in Eastern Europe, revolutionaries like Lech Walesa in Poland resisted any attempt at imposing market discipline. Mikhail Gorbachev tried in vain to reform the Soviet system, but the necessary changes ultimately presented too great a challenge.

Faced with imposing economic discipline antithetical to communist ideals, Soviet-style governments found their legitimacy irreparably damaged. But in the West, politicians could promote austerity as an antidote to the excesses of ideological opponents, setting the stage for the rise of the neoliberal global economy.

REVIEWS
How did the Cold War, which began as a competition to make promises, mutate into a race to break them? And why did the West win? Bartel offers a bold and compelling interpretation that links the history of the Cold War and neoliberalism to dramatic effect. The Triumph of Broken Promises will be essential reading.
-- Adam Tooze, author of Crashed: How a Decade of Financial Crises Changed the World


If the Cold War began with a competition to provide welfare, it ended as both sides imposed austerity and discipline on their populations. Bartel’s brilliantly conceived and researched study renovates our understanding of how and why the Soviet Union was driven toward collapse precisely as the United States, faced with slowdown after the oil shock, moved toward neoliberal governance. Few books explain the makings of our times as well as this thrilling debut.
-- Samuel Moyn, author of The Last Utopia: Human Rights in History


A deeply significant history of how the way in which the Cold War ended gave rise to the hegemony of neoliberal capitalism. Bartel traces this trajectory through personal narratives from East and West and through deep archival research. His book is a must-read for anyone interested in how the Cold War and its immediate aftermath produced the world we live in today.
-- Odd Arne Westad, author of The Cold War: A World History


An excellent work, attractively written, with a powerful argument that carries a large narrative arc from the oil shocks and international monetary confusion of the 1970s to the end of the Cold War. Promises were broken because governments could not meet the expectations of their populations, generated during the postwar economic miracle, about continuously rising incomes. The result was disaffection, but governments’ hands were tied. Well supported by fascinating archival materials, including from the IMF, this is a compelling story.
-- Harold James, author of The Creation and Destruction of Value: The Globalization Cycle


The best structural account yet of the end of the Cold War, the rise of neoliberalism, and the emergence of the current world order. An elegant work of critical historical analysis, the book is essential reading for those invested in building a better, more equitable future.
-- Sean T. Byrnes Jacobin


As the title of the book suggests, the post–Cold War world would be indelibly marked by a retraction of social democratic commitments. Liberal democracy and neoliberal economies prevailed, according to Bartel, because ‘they were the best political and economic systems for breaking promises.’
-- Andre Pagliarini New Republic