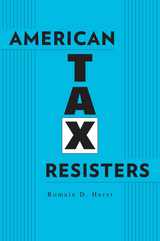 "The American taxpayer"--angered by government waste and satisfied only with spending cuts--has preoccupied elected officials and political commentators since the Reagan Revolution. But resistance to progressive taxation has older, deeper roots. American Tax Resisters presents the full history of the American anti-tax movement that has defended the pursuit of limited taxes on wealth and battled efforts to secure social justice through income redistribution for the past 150 years.

From the Tea Party to the Koch brothers, the major players in today's anti-tax crusade emerge in Romain Huret's account as the heirs of a formidable--and far from ephemeral--political movement. Diverse coalitions of Americans have rallied around the flag of tax opposition since the Civil War, their grievances fueled by a determination to defend private life against government intrusion and a steadfast belief in the economic benefits and just rewards of untaxed income. Local tax resisters were actively mobilized by business and corporate interests throughout the early twentieth century, undeterred by such setbacks as the Sixteenth Amendment establishing a federal income tax. Zealously petitioning Congress and chipping at the edges of progressive tax policies, they bequeathed hard-won experience to younger generations of conservatives in their pursuit of laissez-faire capitalism.

Capturing the decisive moments in U.S. history when tax resisters convinced a majority of Americans to join their crusade, Romain Huret explains how a once marginal ideology became mainstream, elevating economic success and individual entrepreneurialism over social sacrifice and solidarity.

REVIEWS
Romain Huret’s account of tax resistance since the U.S. Civil War is mainly a narrative, with many compelling and repelling stories of murdered tax officials and paranoid fantasies…The U.S.’ cast of resisters is substantial, and many of them make Sarah Palin look timidly progressive. The Tea Party did not arise from nowhere, but had a long history that Huret explains here with wit and style as he details the myriad forms of Americans' resistance to paying tax.
-- Martin Daunton Times Higher Education


American Tax Resisters reminds us that today’s Tea Party is less a direct descendent of the Boston Tea Partiers than the flowering of a movement that started during the Civil War and has been around ever since…Huret recounts how American tax resistance evolved from a cause of the upper crust to one that existed at the fringes of the middle class, and from there moved into the mainstream. By examining the roots of this long-simmering discontent and painting a complex portrait of those discontented, he hopes to spark a debate, on both sides of the Atlantic, about the social function of taxes and their role in mitigating inequality.
-- Patrick L. Kennedy Boston Globe


A must-read for all those who care about our democratic future. Romain Huret’s fascinating history of ‘tax resisters’ in the United States allows us to better understand the roots of today’s tax protest movements. To a large extent, America invented the most ambitious form of progressive income taxes over the past century—as well as its most radical opponents. If you want to know why, read this book.
-- Thomas Piketty, author of Capital in the Twenty-First Century


In this important work, Romain Huret reconstructs as no one else has the durable political tradition out of which the Koch brothers, the Tea Partiers, and other prominent tax resisters of our time emerged. A fascinating and indispensable guide to 150 years of movements, personalities, and struggles that have done so much to shape the conservative temper in modern America.
-- Gary Gerstle, author of American Crucible: Race and Nation in the Twentieth Century


Romain Huret has written the definitive account of tax resistance in the United States. Rather than presenting opposition to taxation simply as part of American political culture, he meticulously traces the organizations and activists who fought and negotiated with the government as it developed its capacity to tax income. An important history that reveals the roots of contemporary debate.
-- Julian E. Zelizer, author of Governing America

TABLE OF CONTENTS
Contents
Prologue
1. Unconstitutional War Taxes
2. Down with Internal Taxes
3. The Odious Income Tax
4. Not for Mothers, Not for Soldiers
5. The Bread-and-Circus Democracy
6. From the Kitchen to the Capital?
7. The Tyranny of the “Infernal Revenue Service”
8. Tea Parties All Over Again?
Epilogue
List of Abbreviations
Notes
Acknowledgments
Index