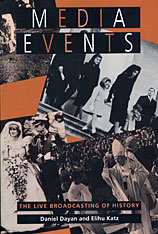 Constituting a new television genre, live broadcasts of “historic” events have become world rituals which, according to Daniel Dayan and Elihu Katz, have the potential for transforming societies even as they transfix viewers around the globe. Analyzing such public spectacles as the Olympic games, the wedding of Prince Charles and Lady Diana, John F. Kenndy’s funeral, the moon landing, and Pope John II’s visits to Poland, they offer an ethnography of how media events are scripted, negotiated, performed, celebrated, shamanized, and reviewed.
REVIEWS
Media Events is a feat of scholarship about a medium that tends to defy scholarship. It is a comprehensive, thoughtful, and original delineation of a phenomenon of live television as a powerful social force. This book marks a milestone in the understanding of how we are affected by television.
-- Daniel Schorr, National Public Radio


An important work that should be read by everyone in the media and cultural studies and who may be involved in the study of other modern institutions and political processes.
-- Eric Rothenbuhler Contemporary Sociology


The publication of Media Events is itself a media event of great importance to scholars and professionals in broadcasting and electronic media.
-- Michael Real Journal of Broadcasting and Electronic Media