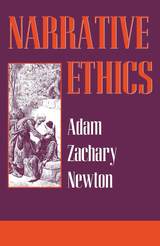 The ethics of literature, formalists have insisted, resides in the moral quality of a character, a story, perhaps the relation between author and reader. But in the wake of deconstruction and various forms of criticism focusing on difference, the ethical question has been freshly negotiated by literary studies, and to this approach Adam Newton brings a startling new thrust. His book makes a compelling case for understanding narrative as ethics. Assuming an intrinsic and necessary connection between the two, Newton explores the ethical consequences of telling stories and fictionalizing character, and the reciprocal claims binding teller, listener, witness, and reader in the process. He treats these relations as defining properties of prose fiction, of particular import in nineteenth- and twentieth-century texts.

Newton's fresh and nuanced readings cover a wide range of authors and periods, from Charles Dickens to Kazuo Ishiguro and Julian Barnes, from Herman Melville to Richard Wright, from Joseph Conrad and Henry James to Sherwood Anderson and Stephen Crane. An original work of theory as well as a deft critical performance, Narrative Ethics also stakes a claim for itself as moral inquiry. To that end, Newton braids together the ethical-philosophical projects of Emmanuel Levinas, Stanley Cavell, and Mikhail Bakhtin as a kind of chorus for his textual analyses--an elegant bridge between philosophy's ear and literary criticism's voice. His work will generate enormous interest among scholars and students of English and American literature, as well as specialists in narrative and literary theory, hermeneutics, and contemporary philosophy.

Narrative as Ethics
Toward a Narrative Ethics
We Die in a Last Word: Conrad's Lord Jimand Anderson's Winesburg, Ohio
Lessons of (for) the Master: Short Fiction by Henry James
Creating the Uncreated Features of His Face: Monstration in Crane, Melville, and Wright
Telling Others: Secrecy and Recognition in Dickens, Barnes, and Ishiguro
Conclusion

Reviews of this book:
Newton's book will become a pivotal text in our discussions of the ethical implications of reading. He has taken into account a great deal of prior work, and written with judgment and wisdom.
--Daniel Schwartz, Narrative

Reviews of this book:
Newton offers elegant, provocative readings of texts ranging from The Rime of the Ancient Mariner to Winesburg, Ohio, The Remains of the Day, and Bleak House...Newton's book is a rich vein of critical ore that can be mined profitably.
--Choice

Reading Narrative Ethics is a powerful experience, for it engages not just the intellect, but the emotions, and dare I say, the spirit. It stands apart from recent books on ethics in literature by virtue of its severe insistence o its allegiance to an alternative ethical tradition. This alternative way of thinking--and living--has its roots in the work of the Jewish philosopher Emmanuel Levinas and finds support in the writings of Mikhail Bakhtin and Stanley Cavell...Stories, Newton asserts, are not ethical because of their morals or because of their normative logic. They are ethical because of the work they perform, in the social world, of binding teller, listener, witness, and reader to one another...This is a work of passion, integrity, commitment, and mission.
--Jay Clayton, Vanderbilt University

Newton probes with admirable subtlety the key question: what do we gain--and what dangers do we run--when we fully enter the life of an 'other' through that 'other's' story? We have here a rare combination of deep and learned critical acumen with passionate love for literature and sensitivity to its nuances.
--Wayne C. Booth, University of Chicago

Adam Zachary Newton writes with illuminating passion. Drawing on writers as diverse as Conrad and Henry James, Melville and Sherwood Anderson, Bakhtin and Levinas, he asks what it is to turn one's life into a story for another, and what it is to respond to, or avoid the claim of, another person's narration. He has written a wonderful, important book.
--Martha Nussbaum, University of Chicago
TABLE OF CONTENTS