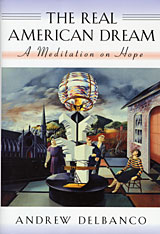 Since we discovered that, in Tocqueville's words, "the incomplete joys of this world will never satisfy the heart," how have we Americans made do? In The Real American Dream one of the nation's premier literary scholars searches out the symbols and stories by which Americans have reached for something beyond worldly desire. A spiritual history ranging from the first English settlements to the present day, the book is also a lively, deeply learned meditation on hope.

Andrew Delbanco tells of the stringent God of Protestant Christianity, who exerted immense force over the language, institutions, and customs of the culture for nearly 200 years. He describes the falling away of this God and the rise of the idea of a sacred nation-state. And, finally, he speaks of our own moment, when symbols of nationalism are in decline, leaving us with nothing to satisfy the longing for transcendence once sustained by God and nation.

From the Christian story that expressed the earliest Puritan yearnings to New Age spirituality, apocalyptic environmentalism, and the multicultural search for ancestral roots that divert our own, The Real American Dream evokes the tidal rhythm of American history. It shows how Americans have organized their days and ordered their lives--and ultimately created a culture--to make sense of the pain, desire, pleasure, and fear that are the stuff of human experience. In a time of cultural crisis, when the old stories seem to be faltering, this book offers a lesson in the painstaking remaking of the American dream.
TABLE OF CONTENTS
CONTENTS
Prologue
1. GOD
2. NATION
3. SELF
Notes
Index