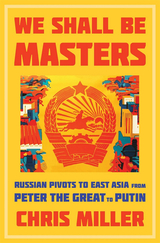 Since Peter the Great, Russian leaders have been lured by opportunity to the East. Under the tsars, Russians colonized Alaska, California, and Hawaii. The Trans-Siberian Railway linked Moscow to Vladivostok. And Stalin looked to Asia as a sphere of influence, hospitable to the spread of Soviet Communism. In Asia and the Pacific lay territory, markets, security, and glory.

But all these expansionist dreams amounted to little. In We Shall Be Masters, Chris Miller explores why, arguing that Russia’s ambitions have repeatedly outstripped its capacity. With the core of the nation concentrated thousands of miles away in the European borderlands, Russia’s would-be pioneers have always struggled to project power into Asia and to maintain public and elite interest in their far-flung pursuits. Even when the wider population professed faith in Asia’s promise, few Russians were willing to pay the steep price. Among leaders, too, dreams of empire have always been tempered by fears of cost. Most of Russia’s pivots to Asia have therefore been halfhearted and fleeting.

Today the Kremlin talks up the importance of “strategic partnership” with Xi Jinping’s China, and Vladimir Putin’s government is at pains to emphasize Russian activities across Eurasia. But while distance is covered with relative ease in the age of air travel and digital communication, the East remains far off in the ways that matter most. Miller finds that Russia’s Asian dreams are still restrained by the country’s firm rooting in Europe.

REVIEWS
As much of the world now turns more attention and resources to Asia, partly in response to China’s emergence as a global power, Miller’s terrific book reminds that Russia made moves toward the East five hundred years ago, and explains why ignoring the Russian factor in Asian geopolitics today would be a big mistake for strategists in Tokyo, Delhi, Brussels, or Washington. His masterful history shows why Russia has been an Asian power for centuries and will remain a central player in balance-of-power politics in Asia for decades to come.
-- Michael McFaul, author of From Cold War to Hot Peace: An American Ambassador in Putin’s Russia


In a panoramic account of three hundred years of Russian history, Miller presents a Russia little known in the West: a Eurasian power that treats its eastern calling as seriously as it does its western one. Exceptionally well written and argued, We Shall Be Masters helps us understand Russia on its own terms and offers historical insight into the future of its relations with China, its main rival and occasional ally in the region and the world.
-- Serhii Plokhy, author of Nuclear Folly: A History of the Cuban Missile Crisis


A sweeping overview of Russia’s long-running pattern of aspiring to yet often falling short of securing lasting influence over Asian affairs. Engaging and impressively researched, Miller’s book offers an insightful historical perspective on contemporary Russian–Asian relations.
-- Willard Sunderland, author of The Baron’s Cloak: A History of the Russian Empire in War and Revolution


Few historians have probed as deeply into the complex history of Russia’s imperial engagements in East Asia as Miller has done here. He weaves a subtle theme through a sweep of events, as Russian tsars, officials, diplomats, and explorers are lured east in various ‘spasms of enthusiasm,’ only for these various pivots to peter out owing to military failure, excessive cost, or simple exhaustion. A supple, well-written, and important work.
-- Sean McMeekin, author of Stalin’s War: A New History of World War II


Miller’s broad historical overview of Russian foreign policy in Asia challenges the conventional view that the country has enduring interests in the Far East…For Russia, Miller argues, Asia has been a land of unfulfilled promises.
-- Maria Lipman Foreign Affairs


A rich and well-informed chronicle of Russia’s engagement with Asia over the past three centuries…Captures the immensity, complexity, and importance of Russia’s eastern borderlands through the eyes of its explorers…A comprehensive and fluidly written survey that will be welcomed by students of international history.
-- Publishers Weekly


[A] highly readable history…The over-ambitious, over-committed and over-confident policies of modern Russia through the globalization period and the rise of Asia in the 21st century mimics the hubris of Petersburg’s historical Pacific Ocean ambitions.
-- Tristan Kenderdine Global Asia


[A] comprehensive and informative account of Russia’s historical outreach to Asia…Vladimir Putin became the latest Russian leader to pursue a pivot to Asia from 2014. Yet, argues Miller, there are limits to this strategy.
-- Angela Stent Survival

TABLE OF CONTENTS
Cover
Title Page
Copyright
Dedication
Epigraph
Contents
Introduction: “Only a Short Distance Away”: Russia’s Arrival on the Pacific Coast
1. Lord of Alaska: Tsar Alexander I’s Transpacific Empire
2. “Russian Control Will Be Guaranteed Forever”: Nikolai Muravev and the Conquest of the Pacific Coast
3. “We Can Still Repeat the Exploits of Cortez”: Expansion and Retreat in China’s Central Asian Borderlands
4. “Tightening the Bonds between Us”: Sergei Witte and the Trans-Siberian Railway
5. “A New Mecca for the East”: The Bolshevik Revolution in China
6. “We Must Have Our Hands Free”: Stalin’s Drive for Hegemony in East Asia
7. “The Great Hope of Humankind”: Soft-Power Socialism in Asia
8. Perestroika and the Pacific: Mikhail Gorbachev’s Opening to Asia
Conclusion: “Heir to the Empire of Genghis Khan”: Vladimir Putin’s Pivot to Asia
Abbreviations
Notes
Acknowledgments
Index