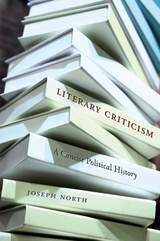 Since the global turn to neoliberalism in the 1970s, movements in literary studies have been diagnostic rather than interventionist: scholars have developed techniques for analyzing culture but have retreated from attempts to transform it. For Joseph North, a genuinely interventionist criticism is a central task facing scholars on the Left today.
TABLE OF CONTENTS
Cover
Title Page
Copyright
Contents
Preface
Introduction
1. The Critical Revolution Turns Right
2. The Scholarly Turn
3. The Historicist/Contextualist Paradigm
4. The Critical Unconscious
Conclusion: The Future of Criticism
Appendix: The Critical Paradigm and T. S. Eliot
Notes
Acknowledgments
Index